Psychologist Marisa Franco explains the biggest misconceptions that are hurting our friendships, how relationships shape our personalities and sense of self, and why friendships don't just happen organically

Marisa Franco is an assistant clinical professor at University of Maryland. She writes about friendship for Psychology Today; her articles include “Secrets to Making Friends as an Adult” and “How Open Conflict Benefits Relationships.” Her book, Platonic: How The Science of Attachment Can Help You Make—and Keep—Friends, releases in September 2022.

You are a psychologist whose work focuses on friendship, loneliness, and connection, a fascinating mix of topics, especially given the past years of pandemic-related isolation. How did you come to study friendship?

For me, it was just being in my 20s, going through romantic relationships, and them not working out. And I felt really bad, kind of depressed. So I decided to start this wellness group with my friends where we would meet up and practice yoga, cook, read books, just practice any form of wellness weekly in each other's company. It felt so healing for me, and made me question some of the assumptions I had that made these breakups affect me so bad — you only have love if it's romantic love, you're only lovable if you have romantic love. I was looking around and thinking, I have so much love around me, why hasn't this counted in how I've perceived love? After that, I was getting my PhD in Counseling Psychology and started reading all these books on friendship. I was looking for something that really saw friendship as sacred and was based in science. I didn't find that, so I decided to write my own.

You’ve written that we must “embrace the idea that we are in more control of our social worlds than we think. The more intentional we are about connecting with others, the more we benefit.” What are the biggest misconceptions we hold about making friends? Do the skills for developing and maintaining strong friendships change as we age?

I think we assume friendship happens organically. And it did when we were kids, because we had what sociologist Rebecca Adams calls the main ingredients for friendship to happen organically: repeated unplanned interactions and shared vulnerability. So recess, lunch period, gym period. But as adults, often we're not vulnerable in the workplace, and that's the only place we really have repeated unplanned interactions. So we can't rely on the framework of friendship happening organically; we need to initiate. And this is based on the study that found that people who assume friendship happens without effort are more lonely over time, whereas those that know it takes effort are less lonely.

Initiation just looks like, “Hey, I really enjoyed talking to you. Would you be open to exchanging numbers, we could reconnect later?” I think the problem that makes that so hard is our negativity bias, which is our tendency to predict outcomes are going to be more negative than they actually are, to remember negative experiences more acutely than we remember positive experiences. What we know from the research across so many different fundamental domains of interaction is that our judgments are more negative than reality. Research on the liking gap finds that when strangers interact, they underestimate how much the other person likes them. Research on the beautiful mess effect finds that when we're vulnerable, we think people are judging us more than they actually are. Research on affection finds that when we show affection towards people, we think it comes off as more awkward than it does and underestimate how good it will come off to the other person. And if we only knew people are way less likely to reject you than you think they are, it would be a lot easier to make friends.

How do friendships affect our sense of self?

What happens when we get close to someone is we include them in our sense of self, and what happens to them begins to feel like it's happening to us. In some ways, it's like our sense of self is expanded to every friend we've ever had. Our friendships are really formative. In our teenage years, friends are the primary relationship people have, they're the one people feel most safe in and they open up to the most. And that has implications for who you become as an adult, your self esteem, your level of empathy towards other people. Your template of relationships, according to attachment theory, forms in your parents, but it changes over time. There's teenage years where friends are really doing that changing and sculpting to tell you how to interact in the world. And for example, social anxiety usually develops in early adolescence, and then people suffer from that throughout adulthood. So we get the sense of whether we're valuable, whether we're worthwhile, we find out who we are through seeing ourselves in friends. We figure out how to act in the world through observing other people. People are contagious, their moods are contagious, their behaviors are contagious. So we take on the people that we see and we interact with. Something that I argue in the book is that our personalities are the sums of our relationships. Whether you're trustworthy, friendly, open, cynical, aggressive, all that says something about the people you've interacted with in your past.

Big Idea
Our personalities are the sums of our relationships. Whether you're trustworthy, friendly, open, cynical, aggressive, all that says something about the people you've interacted with in your past.
Marisa G. Franco

You often talk about the “liking gap.” Can you explain what this is, and what its implications are for friendship? What happens when we’re afraid of rejection?

There's research on people that are rejection sensitive, basically very afraid of rejection, but also misfire and perceive it when it's not there. Most social situations are ambiguous — I don't know why you're suddenly quieter than usual, I don't know why you didn't respond to my texts. So for the rejection sensitive, they assume it's all because they're being rejected, they take things very personally. Their mental health is worse, their relationships are worse, they are closed off and withdrawn, because they think they're being rejected. And because of that, they end up rejecting others.

So what I suggest is to assume people like you. I think that is a leap beyond what the liking gap says, which is people like you more than you think they do, not necessarily that they like you. But the reason that I say this is because according to research on the acceptance prophecy, when researchers told people they would go into a group and be liked, they were open, friendlier, warmer, and they actually were liked. It's a self-fulfilling prophecy. There's this framework that I really like from the psychologist Rick Hansen, where he encourages you to intentionally savor positive experiences so that you can counteract your brain's negativity bias. So if someone smiles at you, you can pause and really receive that. Look for safety in other people when you interact with them, because that's naturally going to make you more friendly.

During your session at the 2022 Aspen Ideas Festival, you said, “It’s not radical to prioritize friendship even above romantic partners because that’s been true throughout history.” Can you elaborate on this? What do we miss out on when we don’t give friendship the importance we assign to other relationships — in other words, what do platonic relationships offer us that other relationships can’t?

I’ll start by saying, I think romantic love is beautiful and important. And I think platonic love is. It's not that romantic love isn't great, and we shouldn't have it, it's just that other forms of love are also beautiful. Throughout history, people got married not for love, but because someone would give them resources or it was an honor to combine their names. So they turned to friends for that deeper intimacy, especially because at the time, genders were considered so distinct that the assumption was that your spouse can't really understand you, that's something that you get from your friends. So people had romance with their friends, and when I say romance, I mean idealizing people, feeling very intimate and connected with them, territorial of them, passionate about them. You can see this from how people wrote to their friends, you know, Frederick Douglass saying, the only thing that makes me miss the plantation was my friends. We can't say romance is superior to friendship, because the two are not distinct. Even now, we still have friends that excite us and make us feel passionate and we want to be around all the time. So that's why I struggle with this hierarchy because it creates a false binary. At the end of the day, for romantic relationships to work, the research finds that one of the most important factors is feeling like you're best friends with your partner. Friendship is the foundation from which spousal relationships work. And yet ironically we devalue it.

How we view friendship becomes a self-fulfilling prophecy. We see friendship as inferior, so we don't invest as much time, we don't have the same holidays to celebrate, we don't give each other rights when we become friends, right? And then our friendships become less deep than our spousal partnerships, but it's not because they're inherently so. If we look at our actions and our behaviors, we can understand that any relationship where you pour more attention and affection is going to be the most intimate. I think reading into the history of friendship really helps me envision a world where you could have friends that could be your life partners, or who you can raise children with, or maybe someday give your health insurance to. I don't see it as a hierarchy.

One of the liabilities of how we perceive romantic partnerships now is that it's inflaming our loneliness crisis. According to the researcher John Cacioppo, there's three forms of loneliness, only one of which a spouse fulfills. There's intimate, which is desire for a close intimate relationship that we get through a spouse. There's relational, which is desire for relationships at the level of intimacy as friends. And there's collective loneliness, which is a desire for a community working towards a common goal. A lot of us who embrace the idea of “we become an island, we become one” mentality of romance, we're ending up lonely. The research finds that when we do that, we're less resilient when our romantic relationships aren't going well. There's a study that found that when you are in conflict with your spouse, it disrupts your stress hormone release in a maladaptive way, but not if you have close friends, not if you have quality friends outside of the marriage. So it's sabotaging to both our friendships and our spousal partner. 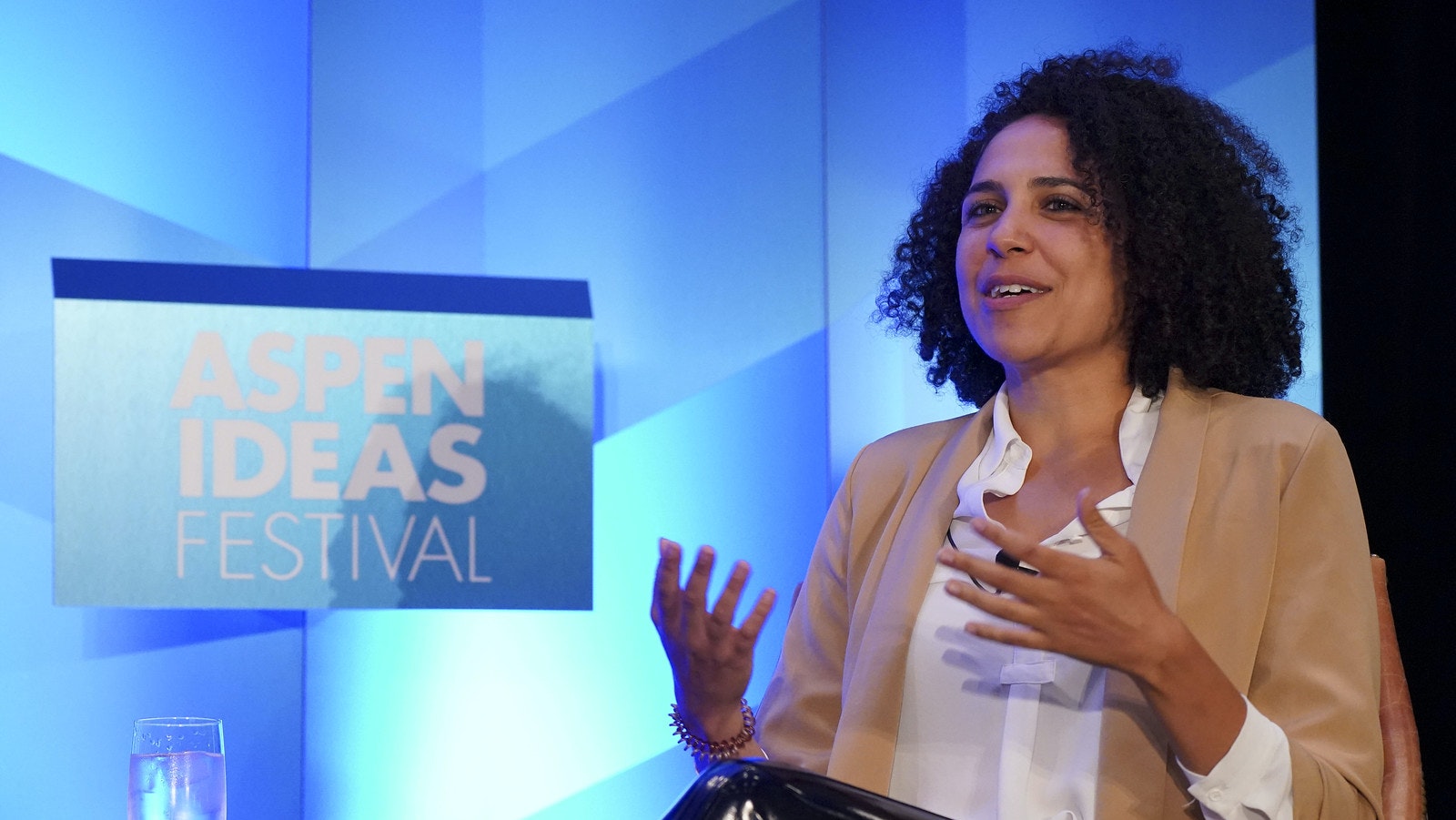 This interview has been lightly edited for clarity. The views and opinions of the author are their own and do not necessarily reflect those of the Aspen Institute.